The inaugural Miracle League of Santa Rosa County baseball games will take place this Saturday at the newly renovated baseball field behind the Tiger Point Community Center in Gulf Breeze.

The baseball field was completely revamped last year to comply with Americans with Disability Act standards, thanks to $350,000 in county funding, as well as funding from the state of Florida, Baskerville-Donovan Inc., Emerald Coast Constructors Inc., IMPACT 100 Pensacola and local contributions.

“There’s a spray-on rubberized surface, instead of grass and clay. The soft rubber surface is wheelchair friendly and crutches friendly,” he said. “Obviously the size of the dugouts are much larger, and we also have two of the three stands for the fans (with) places where wheelchairs can park.”

Build it and they will come: Team effort moves Miracle League closer to first pitch in Santa Rosa County 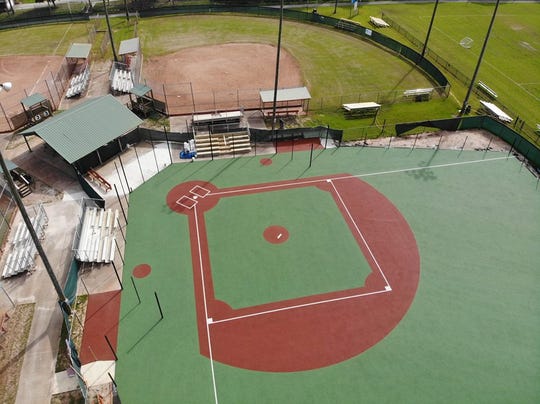 Player and other Santa Rosa County residents got together about 18 months ago with the idea of forming a Miracle League for the county. Pensacola has had a chapter for about 15 years.

“This project has been a great partnership between the county, the state and the community,” Lynchard said in a press release. “The Miracle League is going to be a wonderful addition to the park, not only for the players but also the buddies and other volunteers who get to see the smiles.”

“It’s so amazing to have the opportunity to give the folks that have never been able to play baseball before the chance to play.”

Player said the organization has around 100 members, all Santa Rosa residents, divided into 12 teams. They will play games every Thursday evening, Friday evening and Saturday morning for a five-week spring schedule, and will start again with an eight-game schedule in the fall.

He said he and the organization’s other volunteers are ecstatic to see their dream come to fruition.

“It’s so amazing to have the opportunity to give the folks that have never been able to play baseball before the chance to play,” Player said. “A lot of special needs folks have grown up with brothers or sisters or cousins playing baseball, and have sat in the stands and watched, but have never had the opportunity to do it themselves. So it’s special.”